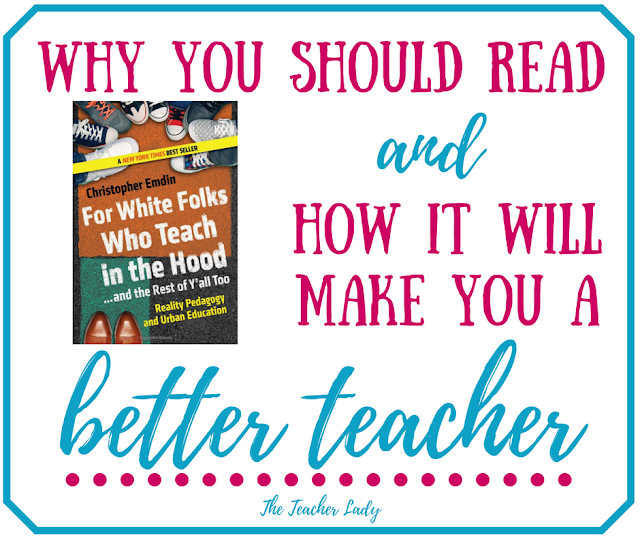 I just finished reading For White Folks Who Teach in the Hood… and the Rest of Y’all Too by Christopher Emdin.  And… wow.  While I have about 12 blog post ideas just from reading it, I knew that I wanted to start by doing a recap of the book itself.  Mostly because the information inside of it is too good not to share and because I. Couldn’t. Put. It. Down. You know it’s good when you can’t stop reading or thinking about it.

Before you get too far into this, I must warn you that this post is severely long.  I tried cutting it down, but I didn’t want to leave out any important information!  Okay, anyway, with that being said…
Let’s start with how I came across the book. My district (Jefferson County Public Schools in Kentucky) hosted a Deeper Learning Symposium at the beginning of June. Christopher Emdin, author of For White Folks Who Teach in the Hood… and the Rest of Y’all Too, was the keynote speaker on the last day of the symposium.  He was phenomenal to watch in person and his insights and perspectives about our students in urban settings blew me away. As a white, female teacher, the differences between some of my students and myself are too large to go unnoticed and yet, they’re usually not acknowledged. At one point in his keynote, I remember feeling very uncomfortable, like I was a fraud. But I knew that the growing happens in the discomfort, so like any good lifelong learner, I ordered his book from Amazon and set out on one of the best reading adventures I’ve ever been on.
When I say that it is chocked full of good information, I’m not lying to you.  It is a terrible study habit to highlight most of the words in a book, but I couldn’t stop because almost every line was one that I wanted to remember!  As a middle class white teacher in an urban area with many students who don’t look like me, I wanted to take in as much as I could so that I could be the best teacher I can for my students.  I almost don’t know where to begin this post. 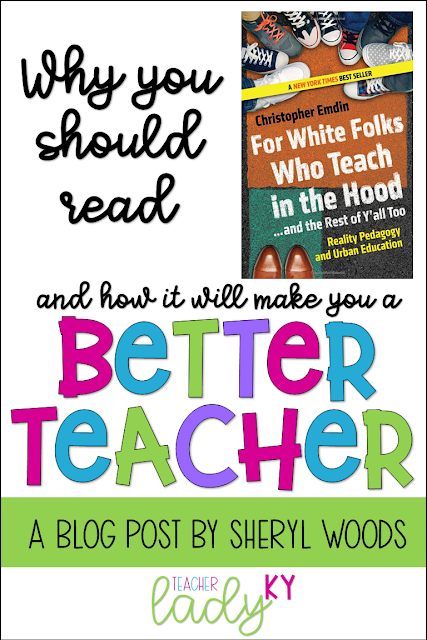 Emdin’s basic premise is that of Reality Pedagogy.  Reality pedagogy is teaching and learning that meets each student on, what Emdin calls, his or her own cultural and emotional turf.  That means that you take the time to recognize each of your students’ realities and use that to inspire your teaching.  At first glance, reality pedagogy is very similar to the popular phrase “culturally responsive teaching.”  And, in many ways, it is.  There are pieces of culturally responsive teaching that overlap with reality pedagogy, such as learning within the context of one’s life and student centered instruction.
But let’s be clear here, reality pedagogy and culturally responsive teaching is NOT as simple as pulling a book with a character who looks like the student.  This is often more offensive to a student’s reality than avoiding it altogether.  Reality pedagogy goes much deeper and is much more effective.  According to Emdin, reality pedagogy is not about seeing students equal to their cultural identity, but instead individuals who are influenced by their cultural identity.  That means, for teachers, while we determine what needs to be taught (the content), our students help determine how that information is taught.  We are no longer planning lessons around the content to be taught, but rather around our students who need to learn the content.

When teaching doesn’t connect to students, it is perceived as not belonging to them.

Within his book, Emdin goes through many strategies that we can apply to our teaching in urban areas that would be more effective.  I will go into all of these deeper in later blog posts (after I do MUCH more research and implementation!) but I want to give you an outline of some of the strategies that he proposes.  Let me know if you’ve used any of these strategies in your own teaching.
Pentacostal Pedagogy – Preachers in southern Black churches are probably the best teachers around because they know how to engage an entire room full of people simultaneously.  Some of the best teachers around don’t have educational degrees, but they know how to create magic.  Watch Emdin talk about how teachers can create that magic in his TED Talk:
Cogenerative Dialogues – Invite students to be part of a “special task force” or cogen whose main job is to identify problems in the classroom and co-create solutions.  In the book, Emdin talks about how one of his cogen groups identified his yelling as a problem in the classroom.  He took it rough (as we all would) but they worked together to come up with a solution which involved a nonverbal cue from his cogen group.  Cogens should be created using a cross section of the classroom population:  a highly performing student, a low performing student, a highly engaged student, and a disengaged student.  While you’re not specifically looking for cultural differences, you’ll find these probably play a part.
Co-teaching – The next step of the cogen mentioned above is inviting students to teach a class.  Emdin states that “they [students] love the teaching and learning process when they are a part of it.”  By having students teach the content and experiencing what it’s like to engage in the lesson planning and delivery process, they gain a better understanding of the teaching process as a whole.  It is important for you to encourage the students to plan for the best way they believe to teach the content to their urban youth community, not the way that they would expect the teacher to plan the lesson.  The goal is to learn from the students and how they interact with each other.
Create a Cosmopolitan Classroom –  The cosmopolitan classroom is one where the students are emotionally connected and invested.  The class turns into a family and each person fills a specific, special role to keep the family functioning.  Class jobs go a long way in the cosmopolitan classroom.  Cosmopolitan classrooms create their own social norms and language that is respected by each member of the group.  These might include a catch phrase such as “I will not lose” or a co-created handshake.
Teach Within the Context of Your Students – Emdin makes an interesting observation in his book by acknowledging that his students are often more tied to neighborhood networks than they are tied to ancestral origins.  So, in order to teach within each of your students’ personal contexts, you need to get out and be a part of them.  Emdin spent his evenings on the basketball courts with his students and his weekends at cookouts and church events with their families.  He observed how they interacted with each other and how they learned from each other and he brought that back into his classroom.
Create Friendly Competition – A large part of urban youth culture is the battle.  It’s not about violence, but about being mentally, physically, and spiritually ready to be challenged.  Just as rappers prepare for a rap battle, students can prepare for classroom battles where their knowledge of content is put to the test.  The beauty of the battle is that even students who struggle with content and may perform poorly on standard academic tests have the opportunity to shine in a different environment.
Keep it “Clean” – To be blunt:  fashion, art, and aesthetics matter.  Emdin says, “engaging with an audience who values aesthetics requires attention to one’s attire.”  Urban youth display their personalities through their dress and they should be allowed to express their style without being punished for it.  A good guideline to follow is if what a student wears or chooses to do impacts teaching, learning, or his/her intelligence, then it should be addressed. Otherwise, self-expression should be welcomed.
Teach Students to Code Switch – This chapter could turn into 2-3 blog posts all on its own, but the basic premise is that students should be taught how to engage in different environments.  How one speaks on the basketball court is likely not the same way they will speak in traditional classroom settings and is far removed from Ivy League college lingo.  While it’s important to meet students where they are and let them be themselves within our classrooms, they also need to know how to navigate the world outside of our classrooms.  Code switching is how students (and people of other cultures in general) do that.
Let Them Be Where They Are (on Social Media) – Social media can be scary for educators, especially when it comes to letting students use it within the educational context of the classroom.  The important thing to remember is that they already do use it to collect artifacts of their realities.  Why shouldn’t we use that to our advantage? Just remember that it is your responsibility to teach them how to use it productively.
I could spend all day talking about this book and still not feel satisfied.  I hope, if nothing else, this post has given you something to think about in regards to your own teaching in an urban classroom or ways that you can push yourself to be more culturally competent.  I’ll leave you with one last quote from the book.  It’s probably my favorite, as I highlighted, circled it, underlined it, and placed a star next to it.  Emdin says,

You cannot teach someone you do not believe in.

Even if you’re struggling with the cultural piece — as all of us middle class, white teachers have — remember that, above all, your students need you to believe in their ability to do it.  For their sake and for yours. 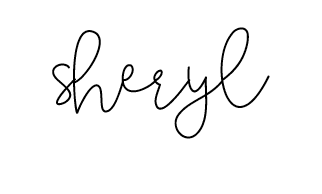 Also, side note, I created a LOT of #booksnaps while reading this book.  I’ll put them all here in case you’re interested.  Another fun way to use social media for teaching! 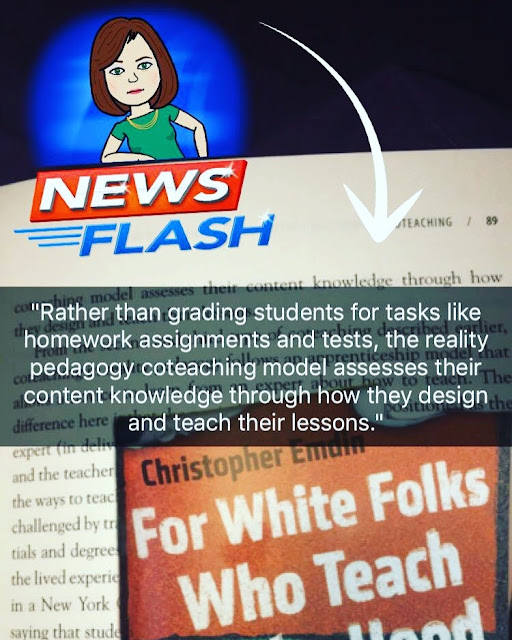 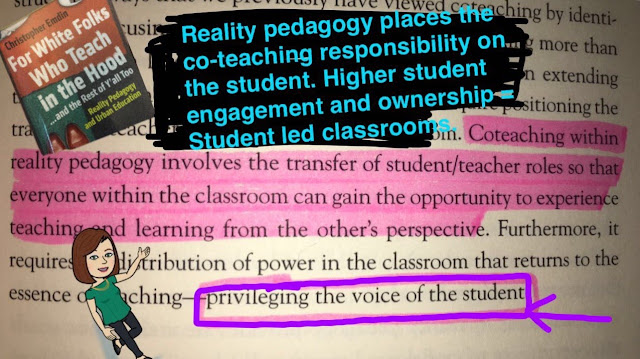 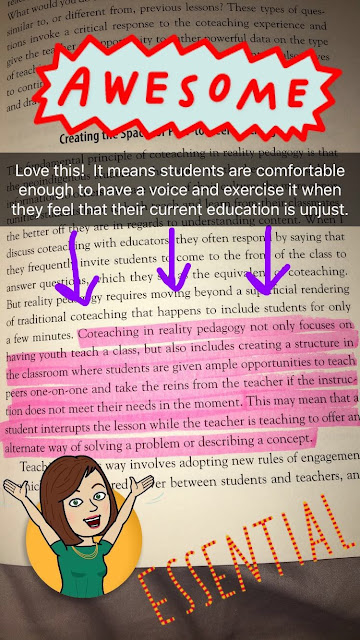 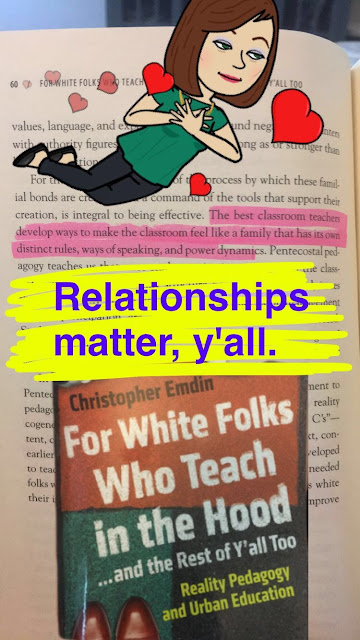 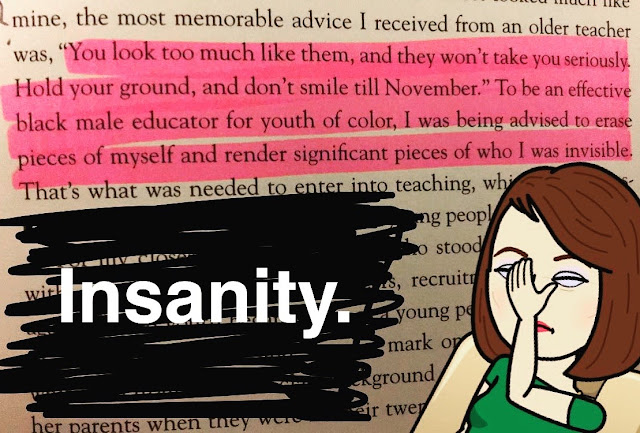 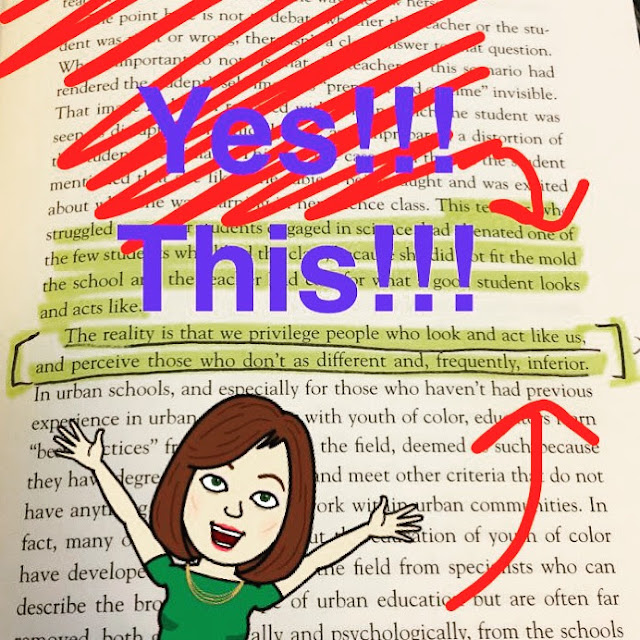 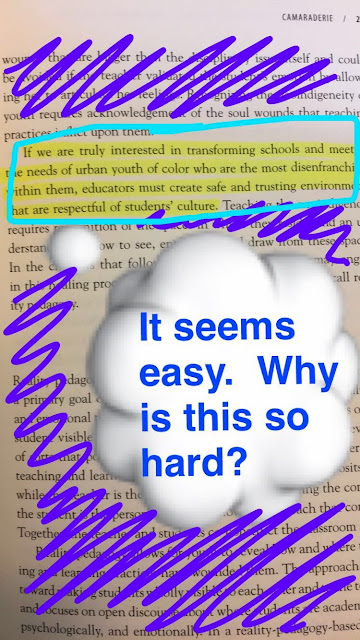 Hi! My name is Sheryl and I am so thankful you've found your way to the TeacherLadyKY blog! I'm an elementary educator from Louisville, Kentucky who is passionate about building relationships and literacy skills with my students, as well as empowering teachers around me to be leaders and rockstars. I've taught everything from kindergarten to fifth grade and I can't wait to share my experiences with you! Enjoy! Read More

The TeacherLadyKY blog header and logo were designed by Sheryl, using fonts from A Primary Kind of Life and Brittney Murphy Design.  Clip art is courtesy of Irina Bandyk, whose Etsy shop is WatercolorCliparts.  The blog theme used is Emilia by Georgia Lou Studios.